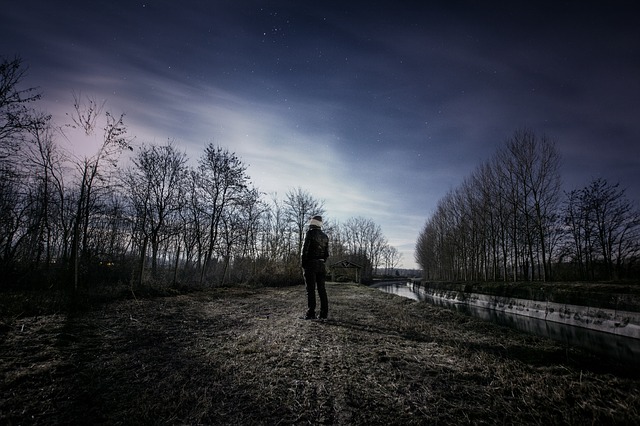 The Change is upon me. It is a painful necessity. I am incapable of going on as I am. The ability to Change was engineered into us, the Explorers, so that we could cope with the rigors and dangers of our infiltration and reconnaissance missions. We are the future, yet we are cut off from our people by what has been done for us. We are separated from our own kind and from those amongst whom we walk, forever alone.

I had brushed against one of the native life forms and attracted his attention. My head was down to hide my face, and my shoulders hunched. I had on a hat and a baggy coat, my hands thrust deep into my pockets. I hurried on as quickly as I could.

I ignored him. He probably thought I looked ill; I felt ill. There was a certain irony there: Ever since I had been re-engineered, I hadn’t been even a little “under the weather,” as the locals quaintly term it. Even a seemingly trivial virus could potentially kill us if our physiology reacted oddly to it. Just as it was possible we would be immune to all native diseases due to our physical differences, so we had been made immune to practically anything and everything new worlds could throw at us. The Change not only renewed our forms, it updated our bodies in response to any changes to our environment. But, going through the Change was a horrible sensation, like the illnesses I remembered from the time before.

I had to get home. Home! I truly had been on my mission for too long if I was thinking of the residence I had taken over as a base of operations as my home. Still, I had lived there a hundred times longer than the time I had spent in my real home. Perhaps my house, this world even, had become home to me, after all.

At last, I saw the gates to my property. I had owned this place a long, long time, since long before the city had encroached upon it and the tower blocks had risen to overshadow it. When I had acquired the place, it had been a remote farmstead, suitable to my task. Later, I expanded it into a manor house, suitably remote to ensure my privacy but not too far from the city to hinder my observation of the developing native civilization. These days, I kept my privacy behind gates and a high wall and substantial grounds.

I slipped within and headed for my house. The long drive suddenly seemed never-ending, and I was gasping by the time I reached my door.

“Hello, darling. How…what the hell is wrong with your face?”

Gillian! It was against orders, I know, fraternizing with the natives, but I had found that my modified body had needs and, over the years, I had grown used to their company. In the past, they had been maids and housekeepers. But as attitudes changed, I had stopped employing servants who might poke around or question me. So, still possessing the same needs, I had begun to date, hence Gillian. Foolishly, I had let her have a key and the pass code to my gates. If only I had realized the Change was drawing near, I could have revoked her access.

“But, your face–oh! And your hands! What happened? I’ll call an ambulance!”

She turned toward the phone, and I took my chance. I had a certain sentimentality for Gillian, but I valued my existence more–and retained some dedication to my mission. I couldn’t let anyone examine my physiology. I don’t know if there is any truth to those stories they have about Area 51 and alien autopsies, but that is exactly the response I would imagine if my true identity were discovered.

I seized her shoulders and slammed her into the wall, stunning her and leaving a red stain on the wallpaper where her nose had shattered.

Gillian staggered back from the flow and fell back onto the floor. As a large bubble of blood grew then burst in the middle of her face, she stared up at me in shock.

“Why…?” she managed to gasp as I crouched down beside her.

“I am sorry, darling; truly, I am, but I cannot risk my discovery by the native life forms of this world.”

My hands slipped around her throat. My grasp was slippery, the skin on my hands falling away in large flakes to reveal damp new flesh below, but I managed to get a good grip and began to squeeze.

“What are you?” she managed to gasp before I cut off her breath.

A good question, but one too complicated to answer in that moment. Slowly, steadily, I began to squeeze, crushing her windpipe and halting the flow of blood to her brain. Slow and steady.

Gillian reached out a hand to my face. Perhaps she was weakly attempting to push me away or was trying to claw at my eyes so that I might release her. Perhaps it was a gesture of supplication, and she was begging for her life. Maybe she just wanted to know the answer to her question. It may even have been a gesture of farewell.

In the end, it didn’t matter. Her fingers caught a loose flap of skin from my face and pulled it away. Probably, the raw, wet flesh below it was terrifying for her to see, but it was not to last for long as I squeezed the life out of her.

“Good bye.” I twisted her limply hanging head, snapping her neck in a single fluid motion. It was over. We were over. Gillian was dead. I was surprised to feel just the slightest twinge of guilt and smothered it by casting my gaze over the mess we had made. I would worry about that and disposing of her body later.

I stood and walked away from her lifeless body, stripping off my clothes as I went. The fabric took flaps of sloughing skin with it. As I walked, I picked off smaller fragments. It hurt, but it felt good, as well.

Reaching the bathroom, I stepped into the shower and allowed the warm water to flow over me, my hands massaging the remaining flakes free to collect in the drain hole. Chunks of scalp fell away to reveal new hair beneath, like a bloody buzzcut. The water stung me, but despite the pain, it felt marvelous. I was beginning to feel better now. The Change was nearly complete.

Stepping out of the shower cubicle, I slowly turned repeatedly, allowing the air to dry me. Slowly, the red-raw, damp flesh began to dry and solidify into human-seeming skin until, an hour later, it was over. The Change was complete.

I walked over to the bathroom mirror and stared into it. And here was the irony of Gillian’s death: Had she not seen me then, she would never have known what had happened. For the face that stared back at me from the mirror was the same face that I had worn throughout my entire sojourn upon the Earth, the same face that had been restored a thousand times before. The more I change, it seems, the more I stay the same.

DJ Tyrer is the person behind Atlantean Publishing and has been widely published in anthologies and magazines around the world, such as Disturbance (Laurel Highlands), Tales of the Black Arts (Hazardous Press), Amok!, Stomping Grounds and Ill-considered Expeditions (all April Moon Books), Altered States II (Indie Authors Press), Destroy All Robots (Dynatox Ministries), and Sorcery & Sanctity: A Homage to Arthur Machen (Hieroglyphics Press), and in addition, has a novella available in paperback and on the Kindle, The Yellow House (Dunhams Manor).