Marilda is unaware of her incredible power, and yet she has the ultimate effect on the lives of others she encounters.

Marilda hummed along to the music on the radio while cross traffic hushed over the glittering, hard-packed snow. The traffic light stained the snow red.

Behind her, squabbling broke out. Marilda’s hands tightened on the steering wheel. “Quiet now! We’ll be home soon.”

The kids listened, for once, settling into a wordless truce.

The January night was sharp with cold. Across the street, illuminated letters beamed out the name Remeny Cancer Hospital. The hospital windows, illuminated by the white fluorescent lights inside, were flat as cutouts in paper.

She wondered what was behind those lit windows. People with cancer, she assumed. Lots of them ― it was a big building. People who might be in pain, who didn’t have the opportunity to go to a movie with their kids.

A rush of sympathy washed through her. “Get better, people,” she whispered.

Everything was still, even the kids in the back seat. Marilda squinted up at all the people hidden in the rooms behind the bright windows, suddenly solemn.

“All of you, everyone. Get better.”

Harry’s rear-end hurt. He’d been crammed into this bedside chair since visiting hours ended, afraid they’d send him away if he ventured into the halls.

Nurses had slipped into the room during the night shift, checking IVs, taking vitals, whatever they were doing to make sure Mama was as comfortable as she could be. One of the nurses had brought him a blanket. It had fallen to the floor sometime during the night. Harry shivered and stretched.

Quiet voices echoed in the halls. The doctors would be here soon, pretending there was something they could do.

“Mama. How are you feeling?” Put a brave face on. Pretend that there was any way Mama would ever feel better again.

The smile lit up Mama’s face. She looked ten years younger. “I’m hungry, Harry. Can you get them to bring me a tray?”

On the sixth floor

The small woman wearing the hijab stepped out of the elevator. It was Hamid’s mother, accompanied by two women Robert hadn’t seen before, at her side like protective shadows in the morning-crowded corridor.

“Good morning,” the woman said. She turned to the others. “This is Hamid’s nurse.”

Then the other visitors looked at him too. They were always looking towards the doctors and nurses for any ray of possibility. Questioning dark eyes, asking for answers they didn’t always dare demand aloud.

Robert greeted them all and went into Hamid’s room, followed by the boy’s mother.

The teenager lying in the bed had some color in his cheeks this morning. If yesterday’s surgery had been successful, and then the follow-up treatment, he’d be able to go back to school. Though he might never see a computer screen clearly again, or the face of his mother.

Hamid opened his eyes. It was odd, seeing his gaze move from face to face. It must be a habit. Or maybe the boy could still see vague patterns of light and dark. They’d said that was a possibility.

Then Hamid looked at his mother and smiled a big, wobbly grin.

“Mom,” he said, his eyes shining with tears as the morning sunlight blazed across the hospital room. He dashed them away with a forearm against his eyes.

The woman stopped short. “Alhamdulillah! Can it be?”

“I can see you, Mom. And that’s Robert. I can see his face. Good morning, Robert!”

“Best of mornings, Hamid. I’m so glad for you!” Robert’s hands trembled. This was one of the moments Robert had wished for when he became a nurse, and had never thought he’d see. For once, the disease had lost the battle.

At the fifth floor nurses’ station

Doctor Monroe stood at the workstation in the hallway. Inside room 506, Sister Teresa lay on the bed, blinds open, a ray of sunlight surrounding the bed as if waiting to assume the woman bodily up to heaven.

The numbers scrolled up the screen. Doctor Monroe sipped her coffee, scanning.

The CBC results leaped out at her. Frowning, Monroe looked at the patient ID at the top of the screen: Teresa McDonough. But there must be some mistake.

An exclamation of surprise from the nurse’s station, where three white coats huddled around another screen. Monroe closed the file and hurried toward them.

“There’s something odd about these white cell counts,” Patel said.

“They’re normal?” Monroe felt the momentary leap of crazy hope fade. It must be a computer glitch.

Patel’s voice shook. “I had them repeated. They’re real. The blood count is completely normal.”

The light went on in Sister Teresa’s room. From this angle, Monroe could see the old woman sitting up in bed. She hadn’t been able to do that yesterday.

Her head swam. She reached out for the counter of the nurse’s station for support. “Oh my God.”

The radiologist looked open-mouthed at the girl lying on the table. The films hung in front of the light screen. He re-checked the file on the computer, but there was no mistake. The bone looked completely clean. Strong and clear as a healthy child’s. There was no sign of the advanced cancer that had been in the bone last week.

The head of surgery spread out his hands helplessly. He’d been receiving calls since the early-morning rounds. The group of doctors and nurses who had assembled in his office looked stunned. Three surgeries had been cancelled, the ORs dark.

“I have no idea,” he said. “I’ve never heard of anything like this before. We are all very fortunate. I don’t know what else to say.”

Marilda’s ringed fingers tapped-tapped-tapped on the wheel. Taillights stretched ahead of her, a line of blurry red in the summer downpour. Her windshield wipers whipped back and forth at their fastest setting.

She craned her neck to see the green highway sign. An 18-wheeler loomed in front of her. Traffic was beginning to slot itself into gaps in Marilda’s lane from the shared enter/exit lane to Wilson.

Marilda hated this ramp; everyone merging in and merging out while traffic in the next lane flew by. She looked for a place to fit while headlights and taillights fractured into multiple reflections on the wet pavement.

A gap opened, grudgingly. “Yes, yes,” Marilda chanted. She slid into the line of cars and towards the exit ramp.

A flash of silver as the car behind Marilda swerved into the faster-moving freeway lane. Tires screamed. Marilda looked in time to see a terrified face through the silver car’s window, mouth open in a scream. Then a metallic crunch and a split second of silence.

The traffic ahead of her on the ramp moved, unheeding, almost as if there weren’t real people inside the steel and plastic. Marilda pulled out of the line onto the left shoulder, heart stuttering in panic. She cracked the car door open until it hit the guardrail and inched her way out.

People ran towards the accident. A man tugged at the door of the silver car. Two women scrambled out of the passenger side door of the crumpled SUV. One of them collapsed on the puddled shoulder of the highway, wailing.

There was no movement from the silver car.

A siren cut through the air. There were lots of people coming to help. All of them could probably do more than one shaking accountant with no knowledge of first aid. Marilda half-sat on the guardrail. Rainwater soaked through the soles of her shoes.

If only there were something useful she could do.

She covered her face with her shaking hands. A rush of sympathy washed through her. “Be all right,” she breathed.

The rain ceased for a split second, then spattered on the windshield again. A second’s solemnity, as if the universe listened.

“Anybody in those cars. Be well,” she whispered.

Anne Marie Lutz is the author of two fantasy novels: Color Mage and its sequel, Sword of Jashan. She’s had short stories published in Locothology 2013, the Columbus Creative Cooperative’s For the Road anthology, and most recently in Mirror Dance Fantasy. She lives in central Ohio. You can find her online at annemariesblog.wordpress.com, or on Twitter (@color_mage). 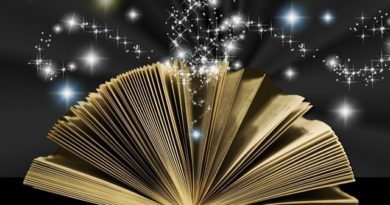 A Tale with a Catchy Title

The Dreams You Can’t Walk Away From 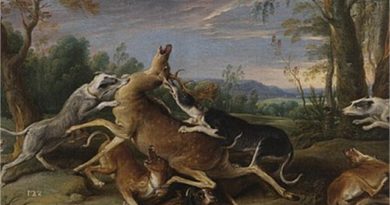